[updated with photos of Mittens wearing it at end]

Last December I knit a sweater and hat for Mittens. The hat was precious and still fits (being stretchy). At the time I put the sweater on her I realized I hadn’t left any room for growth. Darn it. I put it away at the end of the season intending to “do something” about it. Well, when I pulled out the fall/winter clothing for the little ones I found the sweater. Time to do something.
I decided to simply add on another stripe to the bottom hem and the cuffs. Because the body itself was roomy enough this was an option. Ultimately, rather than picking up stitches from the cast-off border, I unraveled back a few rows and picked it up from there. Naturally I did it the wrong way first. I’ll annotate the photos of the process. Hopefully someone will learn from my mistakes, haha. 😉

Here’s the sweater and the yarn I intended to use to lengthen it: 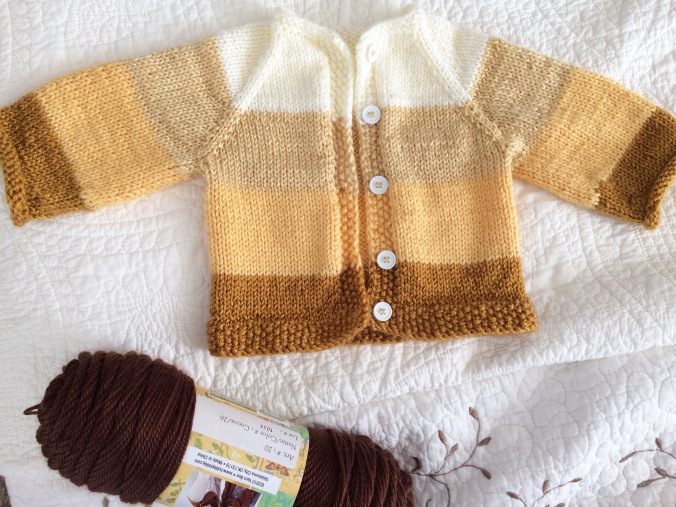 In the pictures below you can see that I picked up border stitches. Since I had edged it in seed stitch I felt like I had to continue it. The farther I went, the unhappier I became.

I unraveled all the way back to before I started the seed stitch and knit the rest of the gold rows in stockinette.

Then it was a simple matter to add the brown. I changed to border to a few rows of garter stitch. 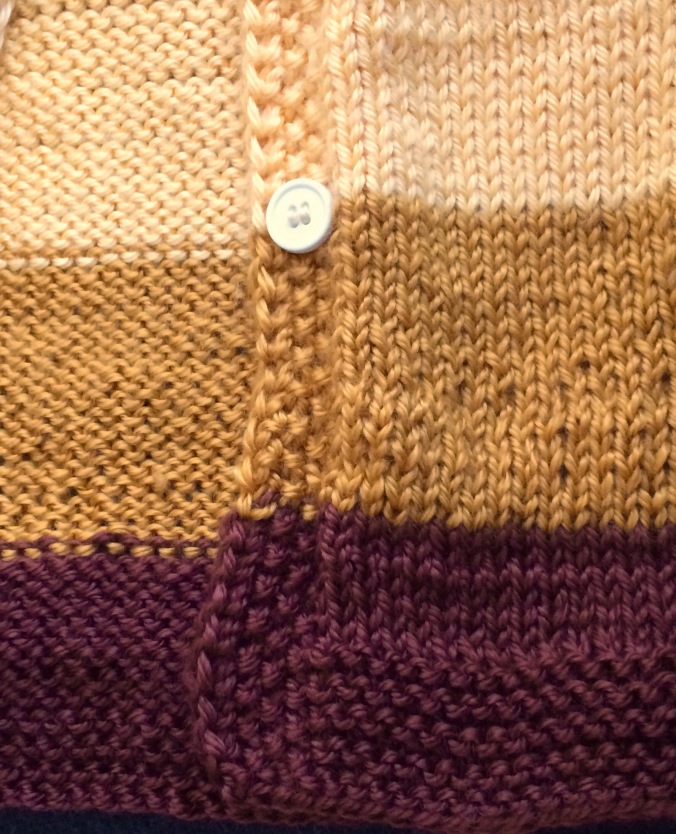 Time to work on the sleeves. 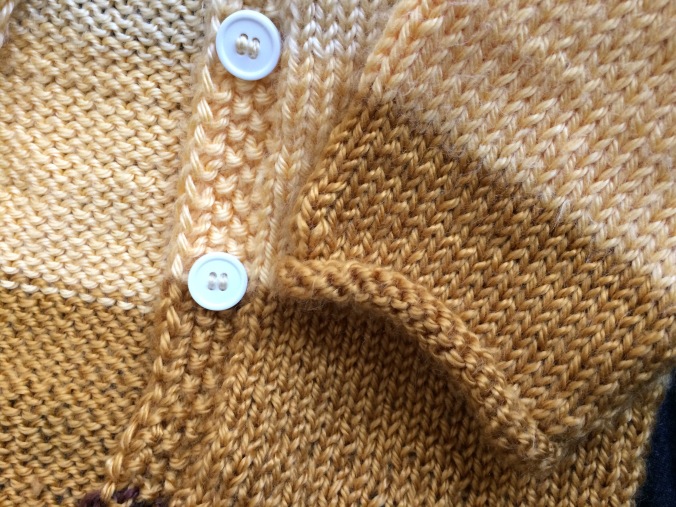 Ok, this time I was smart and started out by unraveling the edge of the cuff. Except that I picked up the wrong end. After I chased it all over (did I lose my mind when I wove in this end?!) I realized it was a woven-in end from where I ran out of yarn near the end and had to join in another skein. Sigh. Now I had a hole.

Rather than trying to fix it I unraveled the sleeve back to the yarn join. Then I just rejoined and knit the rest of the gold stripe again. Unfortunately my tension was a little tighter this time so you can see the difference. Oh well. Then I added a brown stripe and finished it with a few rows of garter stitch. 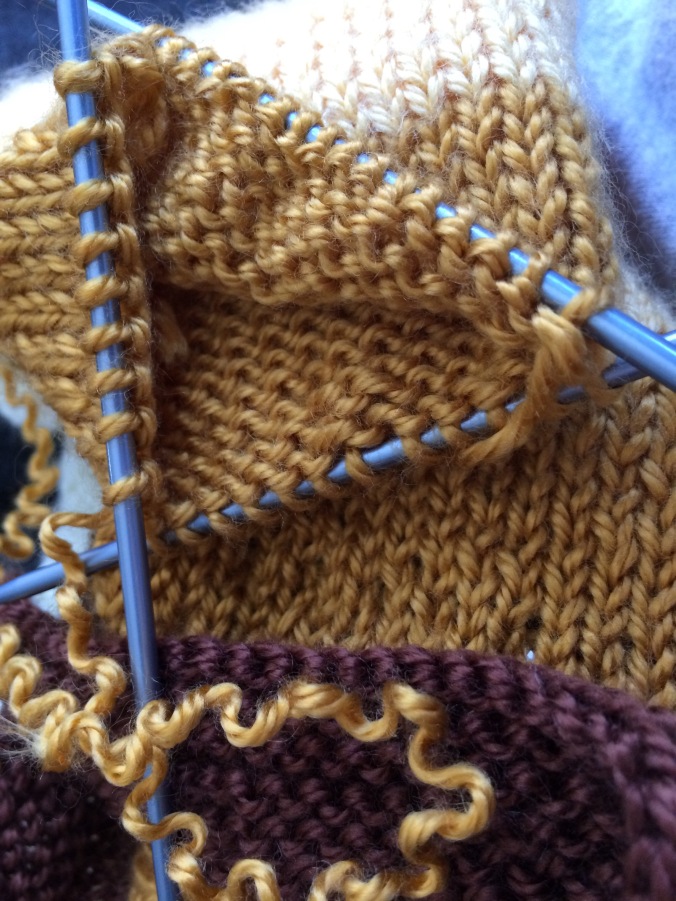 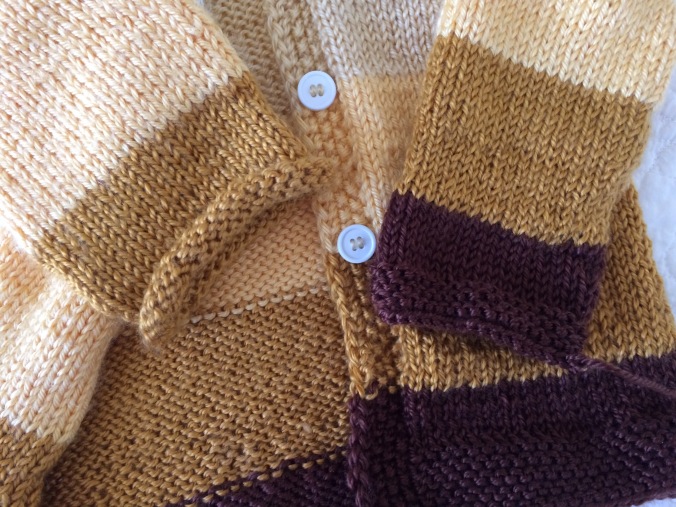 When I did the other sleeve I picked up the right yarn end that time so I didn’t have to reknit so many rows. Then it was just a case of weaving in ends. 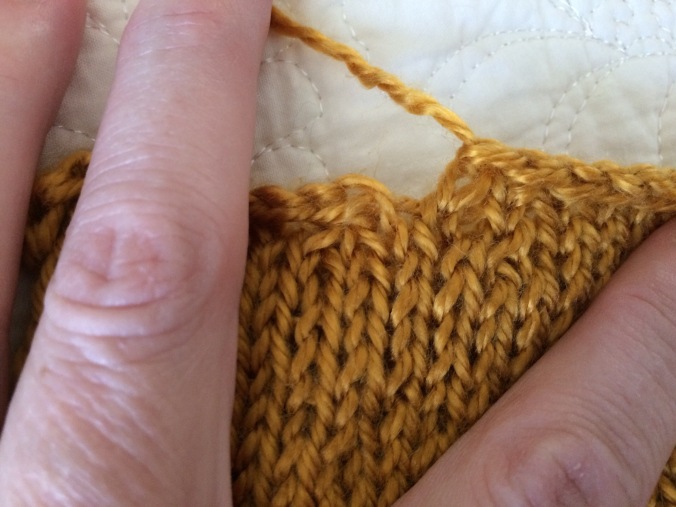 Voila! Finished! I also decided to change the buttons. I had four of the six I need, but I can get some more. 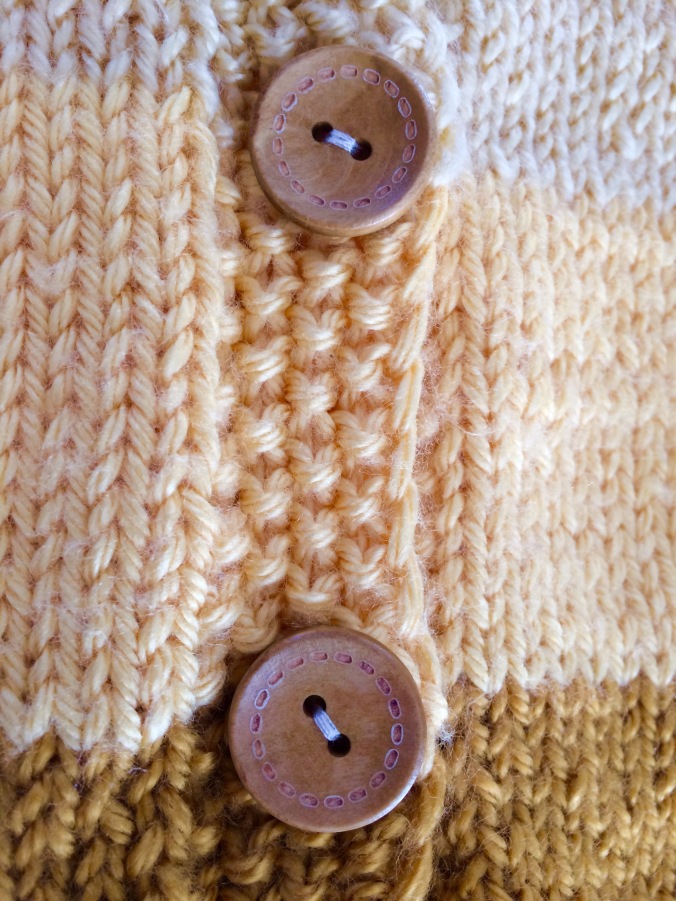 And here’s the sweater with the matching hat:

You can make a lot of alterations on hand-knit items. Has anyone else done this?

[Update: she finally let me try it on her. Sorry about the diaper and random nature of photos!] 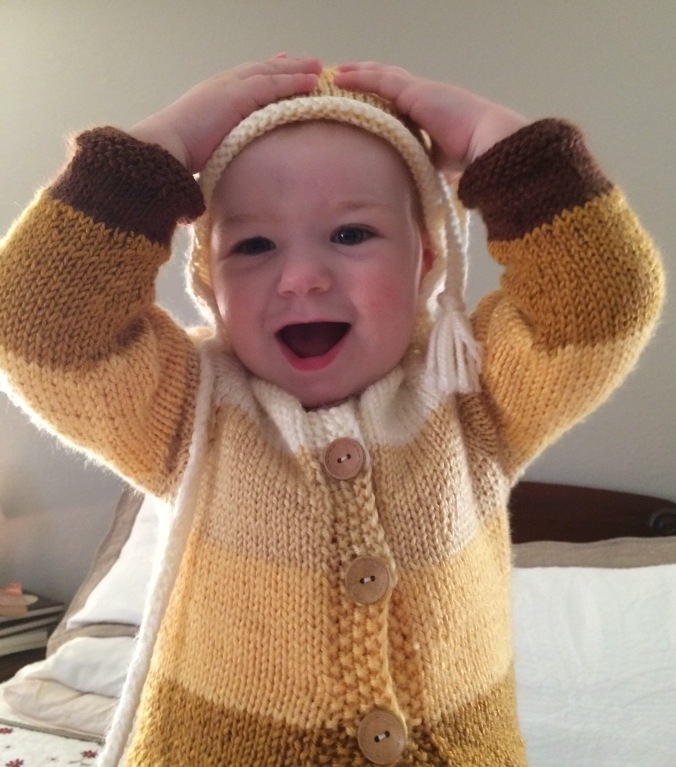 5 thoughts on “Lengthening a hand-knit sweater”