Everyone knows the story of the Apostle Thomas being late to the resurrection, so to speak. I always felt embarrassed on his behalf and rather sorry for him. I mean, bless his heart.

Poor Thomas carried on with the tradition by being late for the Dormition and burial of Mary, the Theotokos. Every other apostle was there at her deathbed (not just the 12, but the 70) except for Thomas. They carried her body to the tomb and laid it there. Three days later Thomas arrives, heartbroken at having missed his chance to see her one last time. At his entreaties they agree to open the tomb so he can at least venerate her holy relics. However, upon opening her tomb, the grave clothes were there, but her body was not. She had been translated, soul and body, into heaven. Her body did not see corruption in the grave.

The issue of Thomas being late is curious, because all of the rest of the apostles were there, not because of their superior devotion, lack of procrastination, or proximity, but because they were all transported by angels to the bedside of the Theotokos. Why was Thomas left out? If Thomas had not been “late” and the tomb had not been opened just for him, no one would have known of her bodily translation into heaven. Thomas was “late” by God’s providence.

Many things that happen to us seem like disasters. When we, acting in good faith, have things go all wrong, it can seem like a slap in the face. Not always, but sometimes, long after the fact, we discover that the very thing we thought was a disaster was actually a saving grace. Thomas may have kicked himself at the time, but it turned out his tardiness was the means by which we know that Christ took His most pure mother to paradise. We celebrate her Holy Dormition today. Joyous feastday! 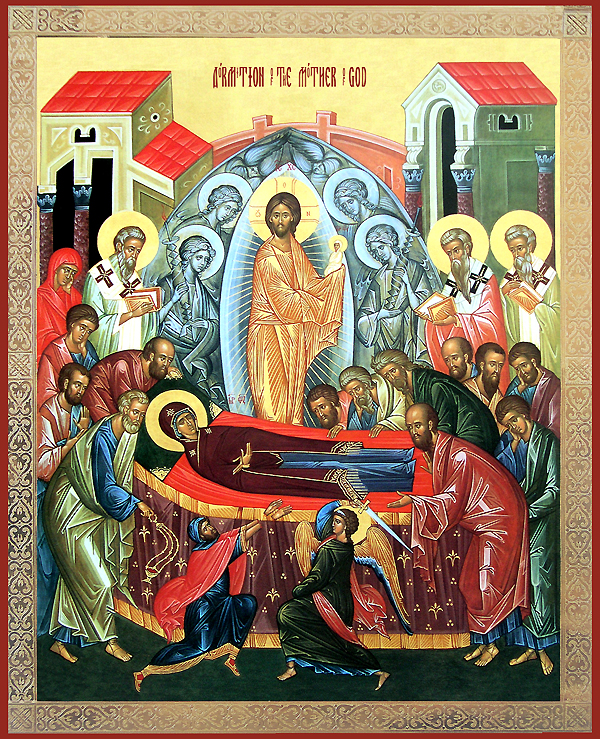 I had a similar (much less exalted) experience after our baby Andrew died over five years ago. He had died at 13 weeks gestation and was born less than two weeks before Christmas. We buried him a few days later and laid beautiful white japonica camellias on his grave and his brother Innocent’s.

The picture I took at the burial.

My parents were to visit a few days later and were staying at a house very close to the cemetery in the country where they were buried. I asked my father to stop by and take some pictures for me since he is a good photographer and I felt I hadn’t done a good job, given that I was so distraught. Belatedly I thought of the camellias, which would have been brown mush by that time after sitting in the open for three days in freezing temperatures. (These particular blossoms don’t even last more than a day in water before beginning to disintegrate.) I didn’t want to see photographs of the graves with piles of dead flowers on them. It seemed to mirror the earthly corruption of their bodies (which I didn’t deny, but didn’t want to think about either). I hoped my mother, with her penchant for tidiness and respect for graves, would sweep them off before my father took any pictures.

They arrived at the house that morning and my father showed me the photographs. I gasped, because there were no dead flowers on the graves. Instead there were beautiful, pure white flowers, looking just-picked. My parents hadn’t realized there was anything odd about the flowers but I knew immediately that it was a miracle. A miracle just for me, for my solace. Yes, my babies had died, but they were alive in Christ, and here was a visual assurance of that. Had my parents not been “late” to the funeral I would not have been able to witness this blessing from God. 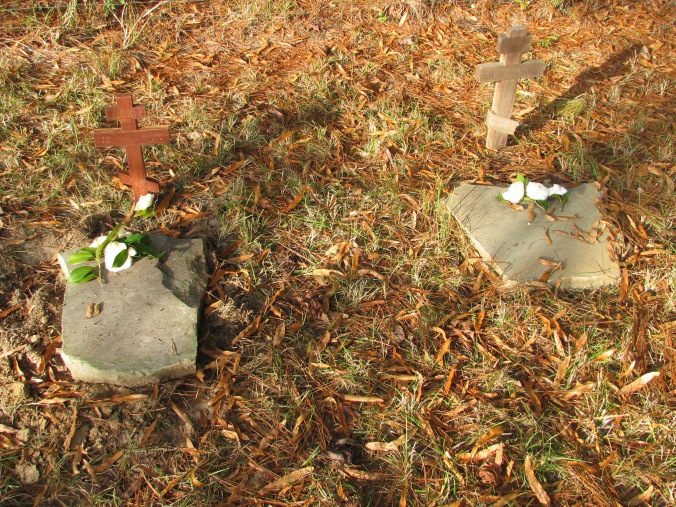 I bet each of you can look back and see many examples of God’s providence in your life. Take heart even when things seem to be going all wrong, and continue to trust in God. His mercy endureth forever, Alleluia!