I have a weak spot for stray animals. However, I’m reasonably practical and can think with my head, not just my heart. Sometimes head and heart have to battle it out for a compromise.
That’s how I wound up with a stray cat in my garage (garage door open 6 inches).

There has been a tortoiseshell cat drifting around the neighborhood for a period of months it seems. One ear is clipped indicating it’s been trapped, spayed, and released. The confusing part is it doesn’t act like a feral cat. The most likely explanation is that this was a lost or abandoned pet who has been on the streets awhile.

I took a picture Saturday before last when it approached us as we were heading to Vespers. I posted that photo and a description on a multiple-neighborhood online site I belong to, but the consensus was that there was no owner. I put some food out for it (I can’t bear to see an animal starve), but it was gone when we got back. I saw it once or twice since then and fed it a few times.

It started raining 2 days ago and Indiana, our tabby, went missing. While we were calling for him yesterday morning the tortoiseshell cat came running instead. Because of the rain and cold I decided to put a cardboard box with an old rug in it outside the front door. There isn’t much shelter from the elements but at least the rain wasn’t pounding directly on the box.

The tortoiseshell cat spent the night in the box and I gave it some food this morning before I took the girls to school. It actually came inside during the confusion while the door was open. (I shooed it back out.) On the way home I decided I would load up the rest of the kids, pop the cat in a carrier, and head up to the animal shelter as soon as they opened today. At least it would be out of the rain and cold. I checked when I got home: they’re closed Mondays.

My conscience couldn’t take it. I opened the garage door 6 inches and carried the cat to the garage, settling it in a stack of moving blankets, some food within reach. We will take it to the shelter tomorrow. 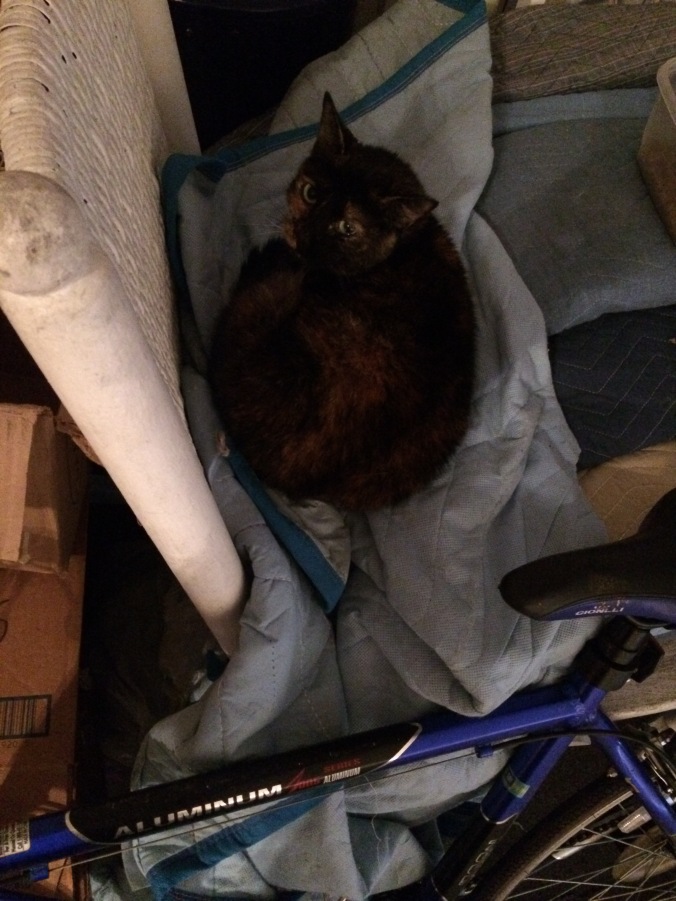 My heart felt better although I was still worried about our missing Indy. I looked out the front door again and called. Suddenly one of the boys heard him meowing and let him in the back door. Thank heavens. It was like a blessing for showing mercy to another cat.

[No, we can’t have another cat. Our landlord was gracious enough to allow us the two cats we brought, and we can’t afford another animal anyway. I wish this cat could find a home because there’s not a mean bone in her body; she’s quiet, gentle, and affectionate.]