As most of you know, when I lost Innocent and Andrew I made blankets for them. I make blankets for all of my babies and it doesn’t matter whether they’re living or departed. Because Gabriel will be two weeks smaller and thus that much more fragile, I felt he needed to be (for the most part) in a glass jar of water instead of swaddled in a blanket. So that he too would have some sort of a blanket, I knitted this shroud (or bag) to put the jar in. I crocheted a little cross to put on it. This is what he will be buried in. I also quickly sewed a tiny flannel blanket that you can see in a few of the pictures. I wanted to have something pretty for him to rest on so I could take photographs of him. 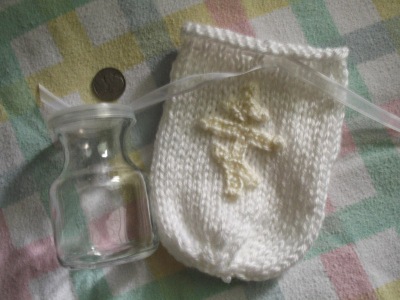 I completed everything last Friday in a great hurry. I had a few hours of contractions and I thought that labor might be imminent. Unfortunately it wasn’t, and I’m still waiting. Time is running out on the deadline the doctor has given me. I have until next week to go into labor and deliver on my own before I have to go in the hospital for an induction. I want to avoid that for a host of reasons, so please pray that labor starts soon.*

*[Update: My sweet baby was born the night I wrote this post.]

(Just to round out last week’s yarn along post, here is the completed baby coat after it had been blocked and buttons sewn on:) 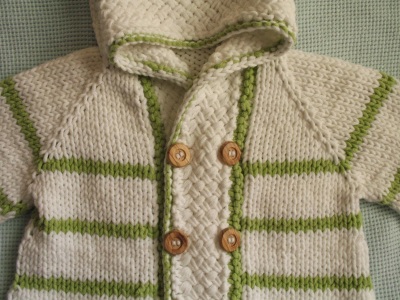 One of the more interesting books I read this week was Admiral Richard Byrd‘s “Alone”, describing the winter months he spent alone at a base in Antarctica. Quite a gripping tale.

What are you making and reading?

8 thoughts on “Yarn Along: Shroud for Gabriel”