I have absolutely nothing to show for this Wednesday’s knit-along! I made six white cotton knitted washcloths for Mother’s Day (three for my mother, three for my mother-in-law) and wrapped them up with some yummy soap, but I completely forgot to take pictures. Ah well. I remembered as I was walking into the door of the post office to mail them. (Yes, I actually considered going home, opening everything and taking pictures. I didn’t.) Suffice it to say, they were ordinary knitted washcloths, three different patterns. But that’s not enough for a knit-along.

I haven’t been doing much else creatively speaking because I’ve been working on the house with Father. But I do want to show off this lovely flower I rescued! I was pruning back some bushes a few months ago and noticed it under one. There were just the long, green leaves and I never recalled seeing any blossoms from it. It had obviously been part of a garden in the front of the house and the bushes had grown over it. With no little trouble, I dug up the entire section of ground and transplanted it five feet to the right so that it would get a little sun and have more room. After a few days I noticed the leaves looked a little more “sprightly” and I had hopes that we would find out what it was. A week or so ago I saw some buds and now we have these lovely flowers! I looked it up this morning and found out that this is a St. Joseph’s Lily, called that because the blooming tends to coincide with St. Joseph’s Day on March 19th (on the Roman Catholic Calendar). We’re a little late, but it’s been a cool spring and then there’s the transplanting to consider. 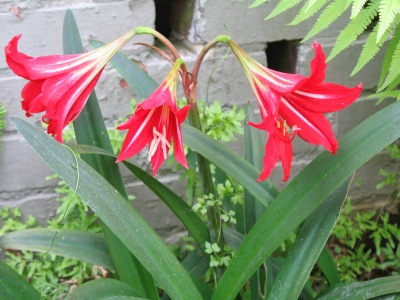 So, back to the house (but first a slight detour). I got these rocking chairs for my birthday in 2012. I had started working on stripping the paint, but boy! Was it on there good! Several layers and gooped on.

Just looking at the crazing you’d think that it would just fall off, but no – I’ve had to put a lot of work into it. 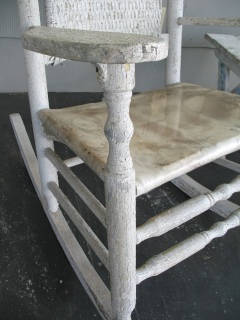 A week or so ago I started scraping. I only had a barbeque scraper, but it was doing pretty well. I followed up with large-grit sandpaper. This is the second rocker that I started working on yesterday.

And this is the first one! I finished scraping and sanding (not that it looked great) and painted it yesterday.When we stripped off the plastic and fabric on the seat, we found that someone had stapled webbing across them. Decided that I’d better leave well enough alone (obviously the seats were sagging when the person did this) I’m planning to recover the seats with foam, fabric and clear plastic. I’m thinking a china blue-and-white patterned material.

So! The house! Father’s been working on the white trim and I’ve been helping in spots. When we got around to the porch we realized that the only way to do it properly was to rip out the screens which would have to be replaced. (The hail we had last year beat them to a pulp.) Once Father ripped out all the screens (Whew! The dirt!!) we took a good look at it and realized that the porch would look so much better without them, and incidentally, without all the additional framing that had been added to hold them in place. Here is a picture of the house (I don’t have one of just the porch, that I can find) and you can see the framing and screens in place. 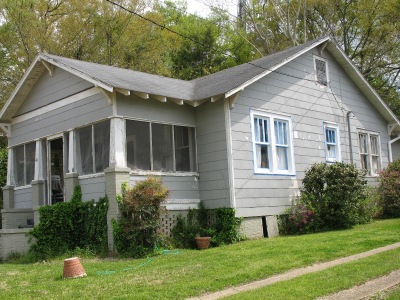 After running it by the parish council on Sunday, we got the go ahead to leave out the screens and tear down the extra framing! How exciting! We’ve spent since Sunday afternoon taking it all out with a hammer and crowbar. It left some extremely unsightly bits where all the framing had been, but we’re scraping off all the glue and caulking and sanding and painting. 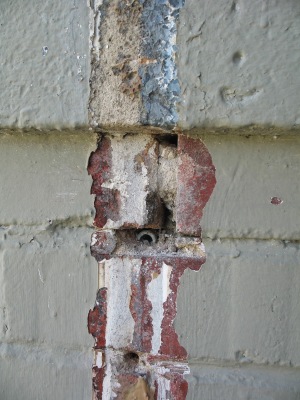 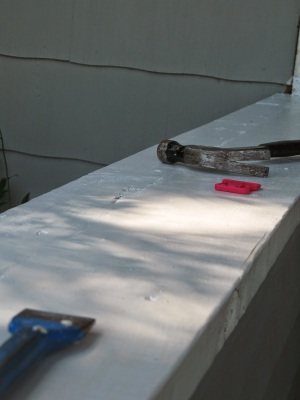 Although we’re far from done (the white stripe across the top and the eve haven’t been scraped or painted yet) you can see how the look of the porch is far more in keeping with the original Craftsman design. When we get the brickwork and the siding painted it won’t look like the same house! (You can see one of the columns below has a rotten board – we’re going to replace that.) 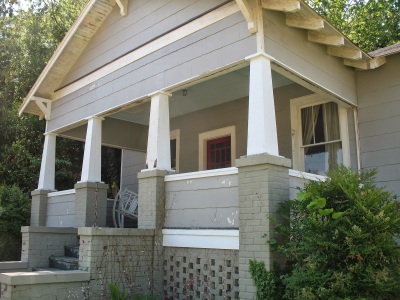 So, all in all, very exciting! The children have enjoyed everything being turned upside-down (of course) and we’ve let them help here and there. I’ll post more update pictures when we get farther along. I’m looking forward to the rocking chairs being all ready for the “new” porch. 🙂