I don’t feel up to posting anything very lengthy today. But to answer some inquiring e-mails in one go…

I saw the doctor this morning – was there over 2 hours. One of the hardest things was being surrounded by pregnant patients, baby and belly pictures and having to listen to the patient education channel turned to pregnancy care. Another hard thing was having two staff members (lab tech and the doctor’s nurse) not realize why I was there and I had to tell them.* One result of the lengthy wait was being assaulted by thoughts of “maybe the ultrasound was wrong…” I had to fight back. The Jesus prayer helped.

The doctor (as I was afraid of) assumed we’d be doing a D&C later this week. He was going to examine me, do an ultrasound (routine) and then schedule surgery. I said that I would prefer to do expectant management. He didn’t feel like this was the best idea but was willing to wait, do and ultrasound on Thursday instead and revisit it then. Apparently misoprostol is out of the question at this gestation at this hospital. He said that yes, they can get away with that sort of thing at UAB, but not out in the sticks. Lest I be giving you the wrong impression, he was very nice. I’m just summing up.

The exam showed a completely closed cervix. This was very discouraging because it’s got to start softening at some point before I can miscarry. How likely is it that something will happen before Thursday? (Not very likely) Father’s worried that I’m being strong-armed into a D&C against my wishes. I admit it is hard to have a calm, rational and objective conversation when you’re by yourself and have been subjected to almost two hours of baby, baby, baby, baby. I don’t know how to fix this for Thursday because I can’t imagine I’ll be in much better shape. Especially after seeing the baby on ultrasound. (By the way, I plan to ask for pictures from this ultrasound unless there has been significant physical change from last week. In that case I’ll try to get them from the hospital.) God knows.

If God wants me to birth this baby by myself then he’s fully capable of getting it started before Thursday. I’m going to pray, calm down and wait and see. Father is fully supportive of whatever I want to do, but he wants to make sure I’m ok with it first.

I want to thank everyone for their prayers and love. This has been terribly difficult and is not over yet. I’m eating better and getting some sleep so don’t worry about that. Thankfully I have a hilarious four-year-old who makes me laugh even when I don’t want to. While we were home from church Sunday, I lay in bed for the most part and Pickles played. I was more grateful than suspicious that he was so quiet. He came in very excited and wanted me to come see the crane he had made. (This was not long before everyone got home.) This is what I saw when I walked into his room: 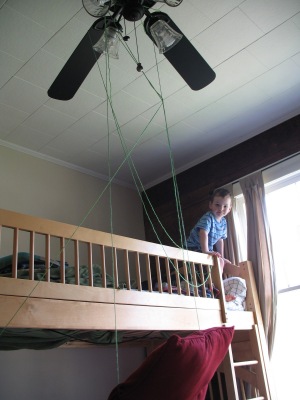 I laughed, took pictures, and left it for Father to take down when he got home. I have no earthly idea how my little engineer managed to do this.

*I don’t know why on earth they don’t tag the charts with something that says “LOSS” so this won’t happen. There’s a special tag we put on the door of fetal demise patients in the hospital just for this reason.