The line of storms came through here around 11:30 last night. I had fallen asleep around 11, tired of waiting on it. Father jokes that, like the Dr. Katz skit, I’m always waiting to “interview the storm as it comes into town”. Hmph.

At 11:30 I woke up when the rain tore into the side of the house like a machine gun. Realizing “oh, it’s just the front line” I put my head back down and headed back out of consciousness. When the power went out shortly after that I woke up again. We slowly became aware that there sure was a lot of light outside given the power outage and, come to think of it, it was flashing a lot. Opening the blinds and peering out we couldn’t see any details but we could tell immediately that the light was not lightning. You’d think it was light from multiple emergency vehicles but the colors (and they changed rapidly) were primarily blue, green and yellow. We also noticed a loud hum.

In the hall we met my mother-in-law with a flashlight. She said she remembered this exact light show and hum when a tornado passed through. I thought it had to be electrically related. Either way, it was very unnerving. We stepped outside to try to see better. The flashing light lasted for at least three minutes and then just abruptly stopped. I’d seen fuses and transformers blow but that happens rapidly and sounds like a shot and a bomb respectively. All I could think was that electricity was arcing from one thing to another but I couldn’t imagine why it was lasting so long.

Needless to say, it took a little while to go back to sleep.

This morning I searched around and found in the news that a fire had been reported at a local substation, been checked out, and nothing found. Someone must have been close enough to the substation to see the source. Still wanting confirmation that that was indeed what we had seen, I found these videos. Cool.

Update: At the bottom of the post is the actual video of what we saw last night. In the video it says it lasted about a minute but I believe that was the video itself. Another source says it was just under five minutes. Interestingly, I just learned that a tornado warning had been issued for our immediate area right when this was happening. Sirens did not go off in our area. Other residents heard sirens after the storm had passed their houses. The local EMA is scrambling to explain this but their logic is faulty.
This week is Mississippi Severe Weather Awareness Week (great timing, huh?). Here is a segment from their brochure:

The NWS would like to draw attention to nighttime tornadoes. These tornadoes pose a greater danger than those that occur during the daylight because once most people go to bed, they are no longer connected to the watches or warnings issued by the NWS. Also at night, visibility is reduced and observing a tornado is more difficult. This is elevated during the winter months because it is not the traditional tornado season. Research by Gaugin et al. 2010 compared tornado statistics from the Great Plains in the traditional “Tornado Alley” to tornadoes in the Deep South or “Dixie Alley”. Researchers found that Dixie Alley had far greater numbers of Killer Strong/Violent Tornadoes between 9pm – 9am time frame. Dixie Alley had nearly twice the number of strong/violent tornadoes from Midnight-Noon time frame than Tornado Alley from 1950-2007. 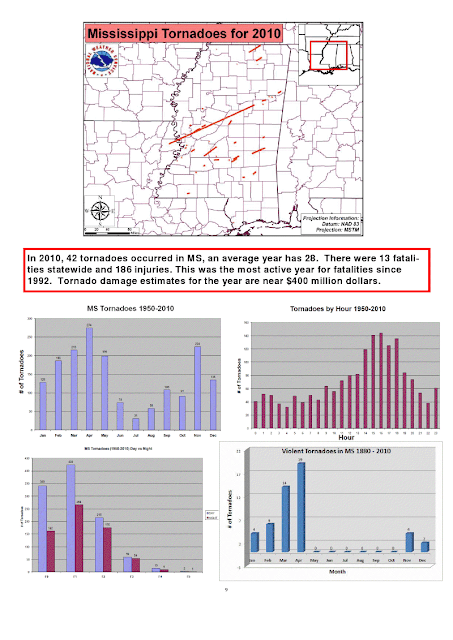 (You’ll have to click on this to see it better – the graphs were inseparable. The bottom left graph is particularly interesting. Purple is day, burgundy is night.)
The video has refused to embed but it’s really worth watching so here’s the link: http://www.whnt.com/videobeta/fadcbcb2-8d68-4254-ae32-fdc5524699d5/News/Electric-Arc-Caught-on-Video