Flopsy got a dollhouse for Christmas. The girls already had a dollhouse, a four-story, stacked level dollhouse that they received for Christmas before Flopsy was born. It was made by Plan Toys and is wooden and sturdy. Flopsy was ready for something a little more “grown up”. She has taken a huge interest in miniatures (she gets it from me) and likes to look at miniature sites on-line. For her birthday next month she has asked for furniture. She wants some things that are a little more suitable for this dollhouse. Her favorite site is Liberty Biberty and I can tell the style she’s going for is “country-shabby-chic”.
We’ve been working on the dollhouse since Christmas, off and on. We put it off for a little while because it was so intimidating. Neither one of us has ever put together anything of this complexity. We were also afraid to make a mistake because she was so set on it. When we actually started I forgot to take pictures. I was too nervous. You have to imagine a zillion pieces, none of them painted. The only things that were pre-constructed were the railings for the porch (thank goodness!). Father reminded me a few days ago that we needed to be taking pictures. We’ve done a huge amount of work since Friday so these pictures only really cover from that point on.
The frame is constructed, the foundation is constructed, the frame is connected to the house, the roof is on (all four parts) and taped. The only nails used were to anchor the porch floor to the foundation. The rest was Elmer’s Glue and blue tape. 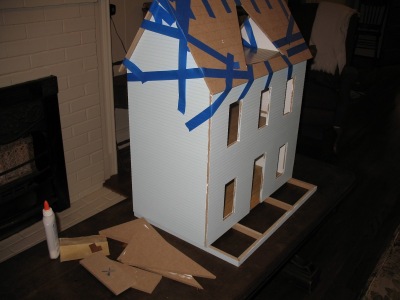 An inside view of the same thing as above. 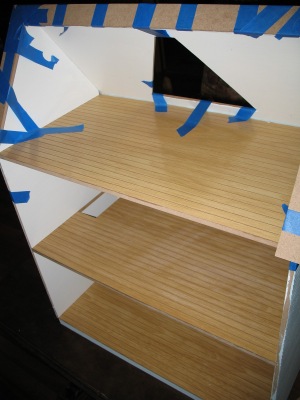 There was a huge amount of painting to be done. Everything needed at least two coats, most of the time three (or four in a few cases). They were sanded between coats. 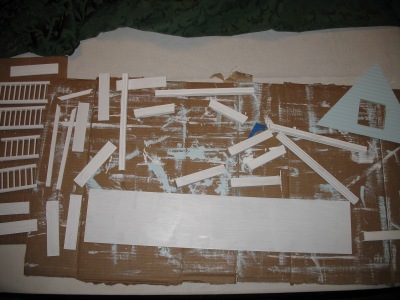 The window frames had to be constructed. The four parts were glued together and then a rubber band was stretched around the frame (carefully – some flew apart) and left there overnight. There were two frames for each window – six windows. (You can see the rubber bands still on below.) 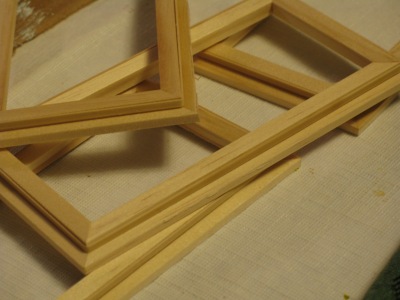 I had put off shingling for a long time because I couldn’t figure out how to do it. The instructions were not terribly clear. Fortunately, there is a site online that gives some tutorials. It’s a good thing I looked for help there because I would have been in major trouble if I had relied solely on the included instructions. The fun part was using scissors to split individual shingles into pairs for use in the valleys of the roof. By the way, the shingles had to be dyed by hand. This was not fun. 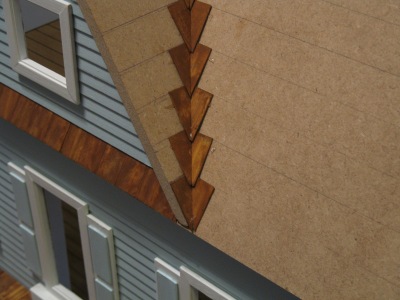 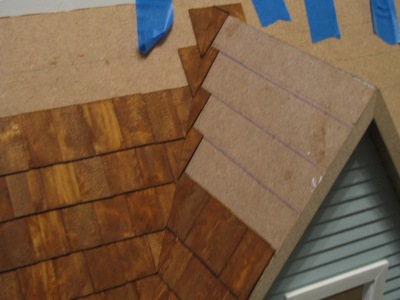 See the shutters? Those had to be constructed too. At least they were easier to paint that way. 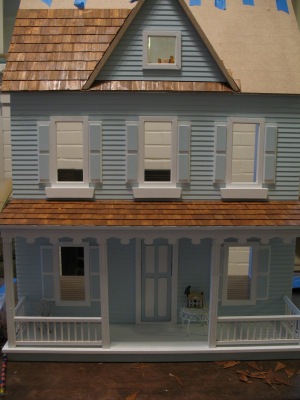 A later view of the inside. The partitions are not fixed in place. Flopsy is still deciding on her room arrangements. We used a lot of blue tape. 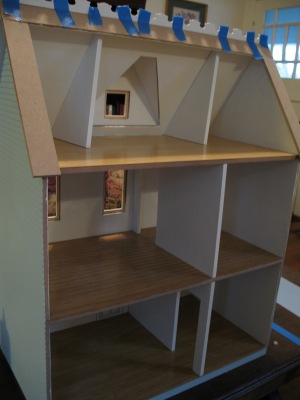 The roof is done! The gingerbread for the eves had to be trimmed (with a saw) because they didn’t fit. It was obvious that this was not a mistake on my part. Irritating. Incidentally, several of the pieces had to be cut to fit. 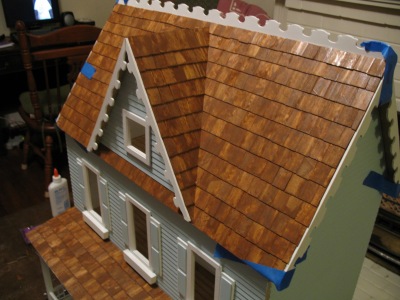 The back roof had to be shingled too. The inside of the house looks like major renovations are going on. I remember this look from our actual houses. 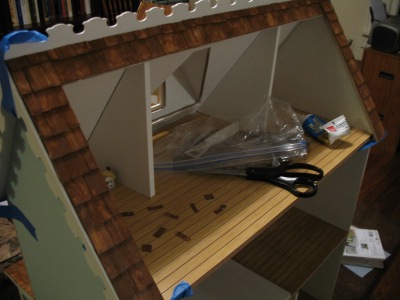 This is the box the sucker came in. It weighed a ton, which is not encouraging when you think that tomorrow I’ve got to pick this thing up and move it to the girls’ room. I think we’re going to look for a lazy susan for it to rest on. Note the picture on the box… 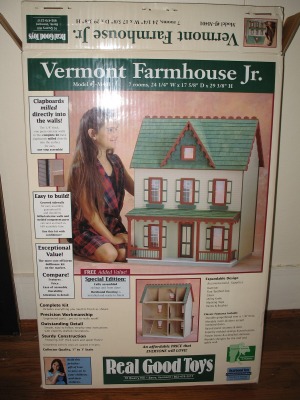 And here is ours! It’s always nice when it looks like the picture. The exterior is completely finished. That porch was a killer, let me tell you. It had (let me count…) 21 pieces not counting the floor. 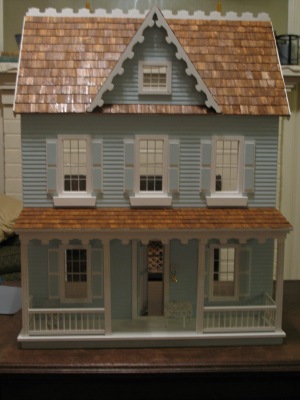 Here it is from the side… 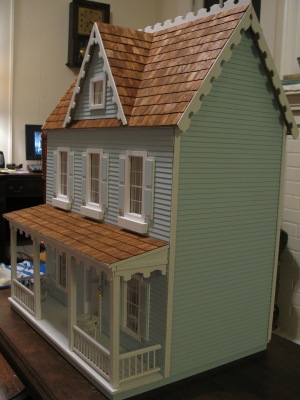 …and the back… (See that little room on the upper left? A closet. Per Flopsy’s wishes.) 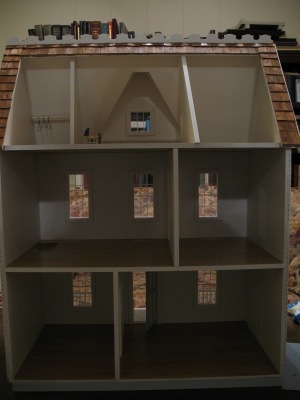 A view of the front porch. I painted the roof underside blue. It looks nice with the white architectural details. Plus, it’s traditional. Like the doorbell? (c; 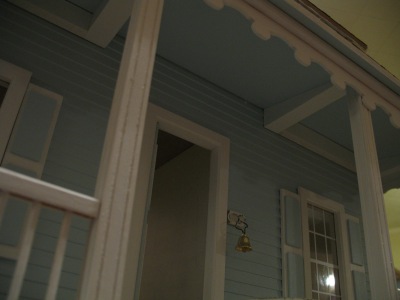 The doorbell was my own construction. I took a bit of wire, a button in the shape of a bell and a piece of scrap wood and glued it all together. The bell really rings. (The table below was a find at the thrift store a couple months ago – there is a matching rocking chair.) 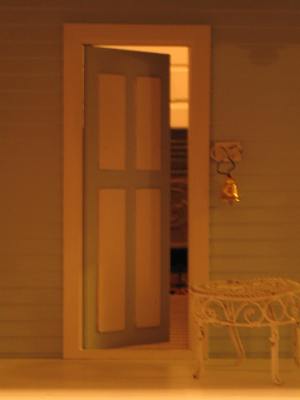 The closet. I didn’t have anything to bore holes with so I made some wooden “sockets” to hold the pole (a piece of dowel.) 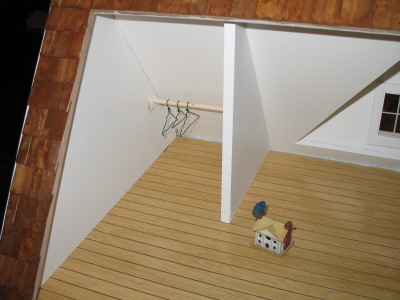 Here’s a close-up. I made the hangers out of floral wire after Flopsy lamented that she had no hangers. Three was my limit for tonight. Now I think she wants me to make clothes to hang on them. What have I started?? 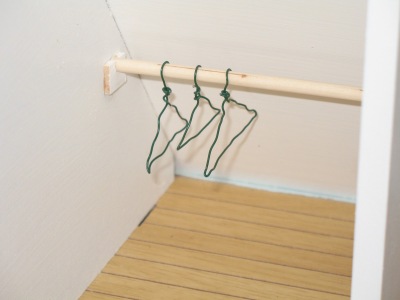 The staircase is going to have to wait until tomorrow. The glue needs that long to dry or it will fall apart when I try to install it. Other than that, it’s all done! I’m SO relieved (and tired). Decorating it will be a lot more fun than constructing it. I’ll post pictures as we get it decorated.
Yay!

15 thoughts on “The Dollhouse”