Today is the feast of the conception of the Mother of God by St. Anna. I don’t know how much attention this feast gets, but really, it’s rather important! The genealogy extending back for countless years had been preparing for the birth of Mary, who would be the chosen vessel of Christ.

Mary’s parents were Joachim and Anna. They had remained childless despite fervent prayer and sacrifices in the temple. Nowadays, to be childless is not seen as being “barren”. It’s a condition many people desire and strive for. But in those days, not being blessed with a child meant you weren’t blessed at all. That you had not found favor with God. Joachim was turned away from the temple by elders who said he was not worthy to offer sacrifice with the rest since he had obviously been passed over by God and left childless.

This was heartrending to both Joachim and Anna and even though they had both reached an age at which childbearing had long since passed (Anna especially), they cried out to God to bless them with one child. Just one! Joachim was so humiliated and heartbroken after the episode in the temple that he left the town and fled to the country, weeping.

The angel Gabriel appeared to each of them and told them that through God they would conceive a child who would be blessed above all else. Joachim was told that his wife would be waiting for him at the city gates. Anna was told that her husband would be coming back into town through the city gates and to go wait for him. When they met, they embraced, and each knew what the other must have heard. They returned to their house, spending time in prayer before conceiving Mary. 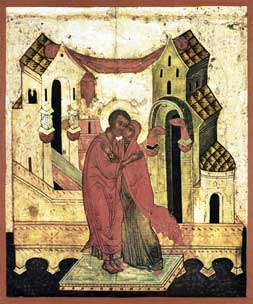 Troparion, tone 4
Today the bonds of barrenness are broken,
God has heard the prayers of Joachim and Anna.
He has promised them beyond all their hopes,
To bear the Maiden of God
By whom the Uncircumscribed One was born as mortal man,
Who commanded an angel to cry to Her:
Rejoice, O Full of Grace, the Lord is with You!

7 thoughts on “Feast of the Conception of the Theotokos by St. Anna”