The [unnamed] Celtic Cross Blanket
Here’s a close-up of the simple knot-work: 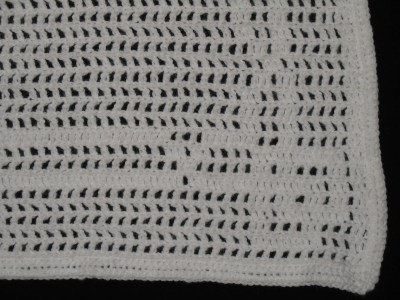 And the entire blanket: 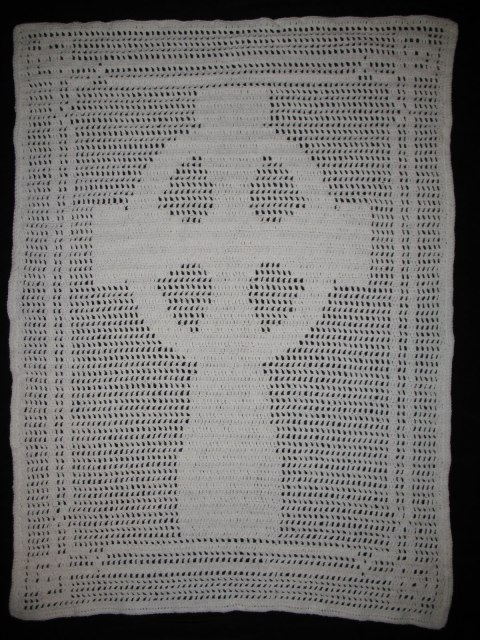 You may notice I said “unnamed” above. That’s right. I like to give each blanket a saint’s name. For this blanket I felt a saint from Ireland, Scotland or the British Isles in general (first millennium) would be most appropriate. I’ve had a few suggestions. My first inclinations were toward Brendan and Bridget. Then I realized that when I said it out loud, it came out “Brendan Branket” or “Brendan Blanklet” or “Bridget Branket”, etc.
I started looking for other names. Father pulled up a list of qualifying saints’ names on line. We quickly realized that such names as “Ninnidh”, “Beoaodh” and “Suaibhseach” were not going to work (holy as those saints might be). Father suggested using a place name instead of a saint’s name, like “Iona”.
That would make it the “Iona Blanket”. (Say it out loud.)
That’s when I decided to open the floor to you all. So we’re going to make it fun!
Leave a comment suggesting one name.  You can leave additional comments with other names if you like. On September 29th we’ll close the contest. On the 30th I’ll have Father pick the saint’s name from all of the suggestions. Then, I’ll draw one additional entrant’s name out of the hat. Both entrants will receive a crocheted bonnet in the mail. (Between now and then I’ll have a picture of the bonnets available to view.)