Our birdcage now has an inhabitant.  Friends of ours took pity on the cage and provided it with a lovely cardinal (beautiful plumage) to keep it company.  Due to the perplexing lack of perch we tried wiring the bird directly to the cage but it kept flopping upside down.  Hm. 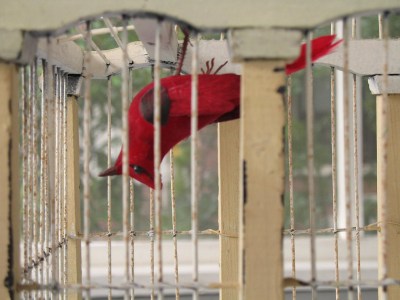 Customer: Um…now look…now look, mate, I’ve definitely ‘ad enough of this. That parrot is definitely deceased, and when I purchased it not ‘alf an hour ago, you assured me that its total lack of movement was due to it bein’ tired and shagged out following a prolonged squawk.

C: PININ’ for the FJORDS?!?!?!? What kind of talk is that?, look, why did he fall flat on his back the moment I got ‘im home?
O: The Norwegian Blue prefers keepin’ on it’s back! Remarkable bird, id’nit, squire? Lovely plumage!
C: Look, I took the liberty of examining that parrot when I got it home, and I discovered the only reason that it had been sitting on its perch in the first place was that it had been NAILED there.
(pause)
O: Well, o’course it was nailed there! If I hadn’t nailed that bird down, it would have nuzzled up to those bars, bent ’em apart with its beak, and VOOM! Feeweeweewee!
C: “VOOM”?!? Mate, this bird wouldn’t “voom” if you put four million volts through it! ‘E’s bleedin’ demised!

(read the whole Monty Python sketch or watch it)
Sadly, despite the bird’s obviously attention-seeking behaviour, Genevieve has largely ignored it. 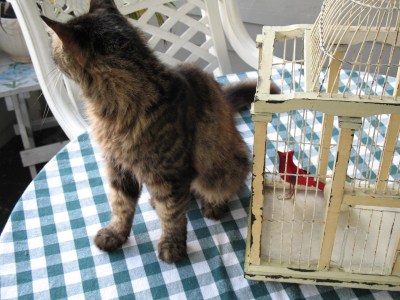