From time to time I find a good article on the myth of overpopulation. This myth is used to support anything from abortion to sterilization and is used as an argument for the funding of birth control and abortion availability in third-world countries. A little publicized fact is that many countries have a birth rate (defined as number of children born per woman) that is below the accepted replacement level of 2.1. Consider the birth rate of these countries (a small sampling – see this chart for the entire list):

If you look at a graph of Russia’s population, it has shown a steady decline. Russia is currently the 8th most populous country with a population of 140 million…and a birth rate of 1.4.

It would appear that the problem will not be an exploding population, but a declining one. 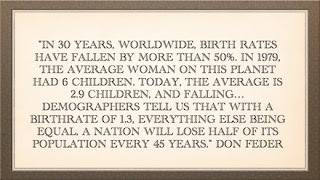 You might say, “So what? The population declines, big deal.” But there are more implications than just shorter lines at Walmart. The people alive right now, in their forties, fifties, sixties, etc. will still be alive twenty to forty years from now. But here’s the catch: there will be fewer young working people to support the tax base and care for the elderly. Being a nurse, health care is something that I have a personal interest in. The population in America is graying, bringing with it a need for more doctors, nurses, hospital beds, nursing homes, home health agencies, etc., etc., etc. There are, however, going to be fewer people to support all of this. Rod Dreher summed it up nicely here. If you think this is an exageration, watch this animated graph.

Here’s a current example of what I’m talking about:

TOKYO (AP) – After getting struck by a motorcycle, an elderly Japanese man with head injuries waited in an ambulance as paramedics phoned 14 hospitals, each refusing to treat him. He died 90 minutes later at one facility that finally relented—one of thousands of victims repeatedly turned away in recent years by understaffed and overcrowded hospitals. Paramedics arrived at the accident scene within minutes after the man on a bicycle collided with a motorcycle in the western city of Itami. But 14 hospitals contacted to provide medical care for the injured 69-year-old all refused to admit him citing a lack of specialists, equipment, beds and staff, according to Mitsuhisa Ikemoto, a fire department official. The Jan. 20 incident was the latest in a string of recent cases in Japan in which patients were denied treatment, underscoring health care woes in a rapidly aging society that faces an acute shortage of doctors and a growing number of elderly patients.
(snip)

Similar problems have occurred frequently in recent years. More than 14,000 emergency patients were rejected at least three times by Japanese hospitals before getting treatment in 2007, the latest government survey showed. In the worst case, a woman in her 70s with a breathing problem was rejected 49 times in Tokyo.

Health Minister Yoichi Masuzoe told a parliamentary committee late last year that the rising number of elderly patients hospitalized for months was in part clogging up space for those needing emergency treatment.